Letter to the Congregation regarding Church reopening

It has been exactly two months since we shut down. Our last day in the office as a staff was March 17th. We immediately began streaming services to help slow the spread of the Coronavirus in the nation. The slogan that was touted by the White House at that time was “15 days to slow the spread.” We accepted those 15 days as our civic duty and worked with our leaders as responsible citizens of the United Sates.

The day after we shut down, Governor Sisolak joined in, and ordered the closing of business in Nevada. We had already done this, but when he did it, it was under the auspices of preventing the overburdening of our health care systems. Since we were already complying with the Federal request, this was not an issue for us at all. Sixty days have now passed, and the hospitals were never close to being overrun. This week, most hospitals in Nevada are resuming normal operations and proceeding with elective medical care.

Last week, the Governor also opened restaurants at 50% capacity. He did not mention churches in his speech at all. Currently, we are restricted to drive-in services or online services only. It seems to me that the only real difference between sitting in a restaurant and sitting in a church is that nobody is handling your food at church. So the question begs to be asked: why are churches still closed?
.
I have been quiet on the issue of church services in an attempt to keep peace, but I have been painfully aware that our Governor has little or no regard for our constitutional rights as Christians. Last week I became a plaintiff in a lawsuit against the Governor regarding his violation of our constitutional freedoms. I also became a signatory on a letter written by one of the attorneys that works for ADF (Alliance Defending Freedom). That letter was delivered to the Governor on Thursday. By Friday, he made it clear that he had no regard for the letter that was signed by almost 200 religious leaders in Nevada.

The attorney for ADF is now moving to file a lawsuit against the Governor as well. I intend on joining this fight. I also encourage you to get involved. You can do so by committing to pray over this issue and asking the Lord about any further involvement. The letter is attached so that you can read it. I do believe that you are free to sign up to receive updates on this matter as well. Thank you for praying over this issue. I look forward to seeing you IN PERSON soon. 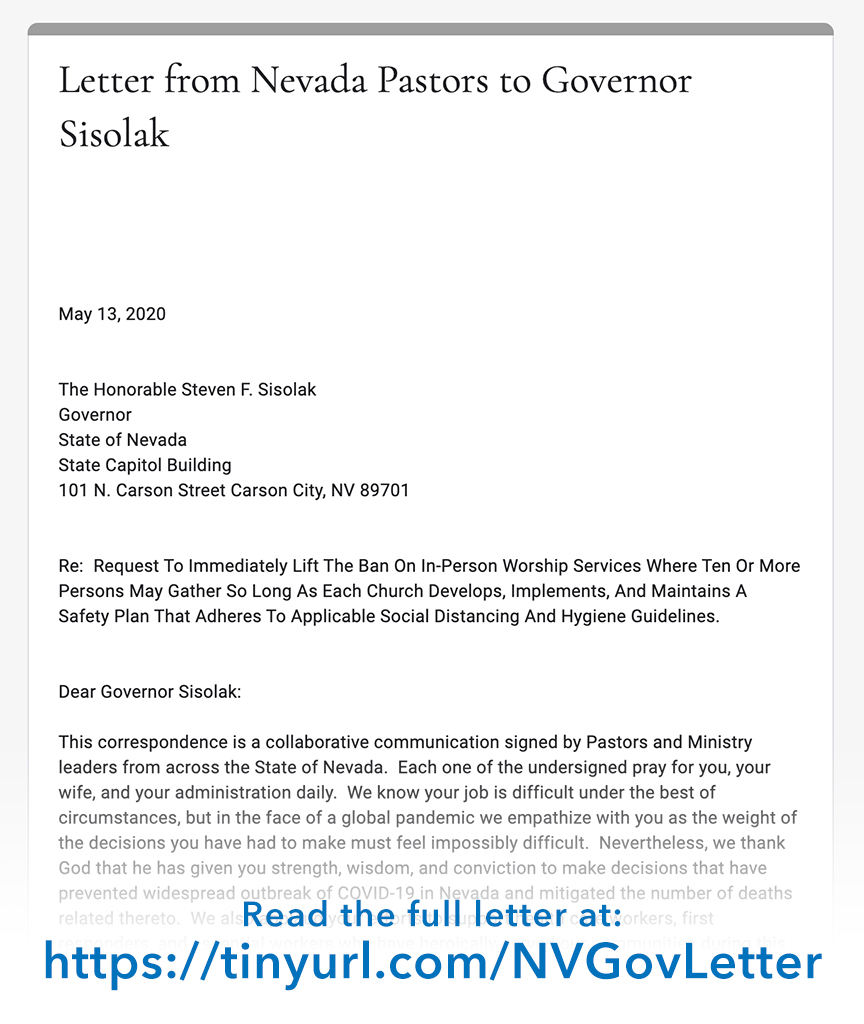 CLICK HERE TO READ THE LETTER TO THE GOVERNOR
LEARN MORE ABOUT : SUBMISSION TO AUTHORITY & CIVIL DISOBEDIENCE
VISIT OUR LIVE PAGE
SUBSCRIBE TO OUR YOUTUBE CHANNEL